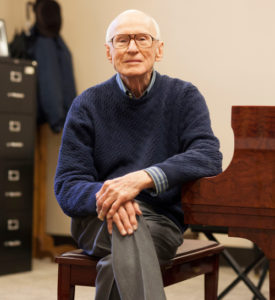 Kentucky music teachers and pianists worldwide lost a dear friend and colleague upon the passing of Maurice Hinson on November 11, 2015, in Louisville. He was only a few weeks shy of his 85th birthday.

Hinson was the most significant and prolific writer on piano literature to live in the history of the instrument and will be remembered for his countless publications on pianism. He was the first President of the Greater Louisville Music Teachers Association (1960-62), Dean of the AGO Louisville Chapter (1962-64), President of KMTA (1962-64), and President of MTNA’s Southern Division (1966-68).

Hinson’s legacy as a teacher began in 1957 when he joined the music faculty of The Southern Baptist Theological Seminary. He taught piano performance, literature, and pedagogy in this setting for fifty-eight years and hosted conferences of KMTA and the American Liszt Society. His influence will be felt for many years to come through his students and publications.